Why a Win for Gin Is Good for Food Safety

A spirited Florida court case threatened the rights of states to enact stricter food laws, so Earthjustice stepped in. 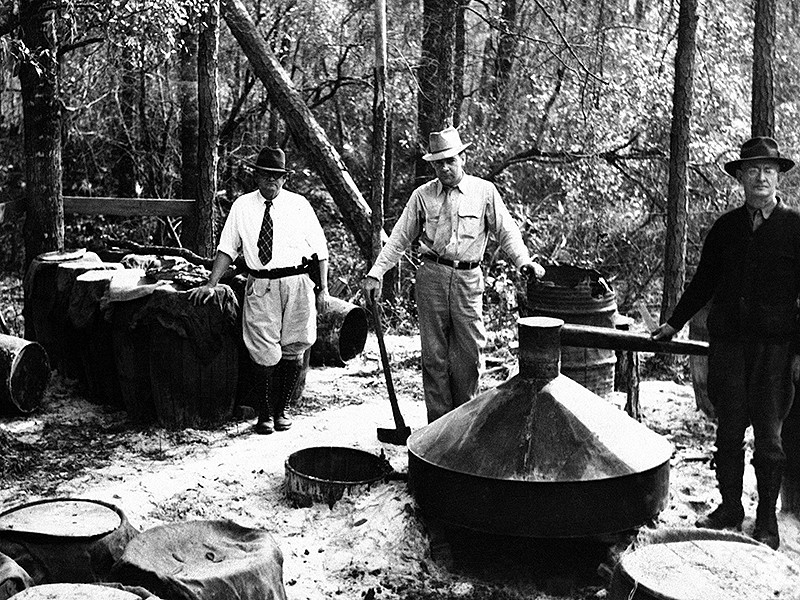 The aftermath of a raid by Federal Reserve officials on moonshiners in Florida on Nov. 24, 1950, where a small still with six barrels of mash was concealed in a forest.

As an environmental law firm, Earthjustice rarely finds itself wading into territory involving bootleggers and bathtub liquor. But in our broader work to get toxic, dangerous products out of our lives, we do often support state food laws that are stricter than the federal government’s. Which is how we recently found ourselves in Florida, opposing some arguments made by the proprietor of a premium gin in a distinctive blue bottle.

The story begins at the height of the Civil War, when disruptions to trade created a liquor shortage. This opened an opportunity for unscrupulous distillers to mix liquor with sulfuric acid, then known as “vitriol,” and other dangerous substances.

Cutting liquor with vitriol made it cheaper, but the booze tasted terrible. So, distillers began adding spices like “grains of paradise” to mask the taste. This aromatic spice looks like peppercorns and is common in West African cooking.

After some cases of sickness from the cheap liquor, Florida lawmakers responded by making it a felony to mix or sell liquor with “grains of paradise” — even though the spices themselves are harmless.

About 150 years later, the Food and Drug Administration (FDA) confirmed that grains of paradise are harmless, and it classified them as GRAS or “generally recognized as safe.” But Florida never got around to repealing its own state ban on the use of grains of paradise in liquor.

In 2019, a Florida resident stumbled upon this antiquated Florida statute and filed a class action lawsuit against Bacardi U.S.A., which produces Bombay Sapphire, a gin that prominently displays its inclusion of “grains of paradise” and other hand-selected botanicals on its distinctive blue bottles.

The Florida resident, Uri Marrache, claimed that the inclusion of grains of paradise in Bombay Sapphire violated Florida’s law. Therefore, producing and selling Bombay Sapphire was illegal. Marrache seemed to want restitution in the form of cash money — even though he admitted he hadn’t been harmed by the product.

There were a lot of problems with Marrache’s case that we won’t get into. But instead of dismissing the case on these grounds, a U.S. district court dismissed it because the FDA already decided that grains of paradise are safe. Essentially, the court agreed with Bacardi’s argument that federal rules take precedence over the state’s rules, which in legal lingo is known as “preemption.”

Florida’s Marrache wasn’t happy with the court’s decision, so he appealed. That’s when Earthjustice stepped in.

We’re not fans of Florida’s law per se. But the court’s decision raised our eyebrows. Because federal food safety laws often don’t go far enough to protect public health, it’s important to preserve the ability of states to enact laws stronger than the federal government’s. For example, we’ve supported states’ authority to get toxic products off the market by enacting food safety standards that are more protective than federal laws — as New York has done by banning PFAS in food packaging.

In May 2020, we filed a legal brief on behalf of Center for Food Safety and other public health NGOs. We explained the importance of state food safety laws and the reasons why GRAS determinations don’t pre-empt those laws. We also emphasized that allowing the GRAS determination to preempt Florida’s law would severely limit states’ authority to adopt protective food safety standards, thereby harming consumers.

In November 2021, the Eleventh Circuit reversed the original preemption ruling and upheld the case’s dismissal on other grounds. As a result, states retained their right to pass stricter food laws, and it’s up to the Florida legislature to determine whether the 1868 law still offers meaningful health protections. Bacardi drinkers, Earthjustice attorneys, and all those interested in protecting public health rejoiced.